Next Stop Beulah Land is a beautiful example of acoustic blues with tasteful harmonica, classic slide playing & sweet harmonies this is bound to do well”.
Scott Levi ABC Central Coast

This is the sort of CD I used to scour the shops for when I first got into Aussie blues.What I like about The Blues Preachers is that they have stayed true to the old style of acoustic country blues, and that makes them one of the few acts still doing it like it used to be. Most other acts (like The Backsliders) have moved on to a more
contemporay variation of the blues.

Their song Trouble, is an interesting number with what sounds like Indian & Aboriginal tones, thanks to the guest appearance by Amie Joy Zar on Mohan Vena, and what sounds like a didg, but may be Doug doing something clever on his harp.

If your looking for a nice selection of old blues songs played and sung very nicely the good old way by a couple of Aussie blues veterans, youll like this CD.

The Blues Preachers & Ian Collard
@ The Wesley Anne:
It’s clad in jackets and scarves and gloves that we huddle to smoke outside the Wesley Anne in Northcote on Friday night. It’s around 8:30pm, the beginning of what will no doubt be an epic evening of various genres of live music, and so the cold is of little consequence, as firstly tonight, here in the old church which now plays host to a bar and music venue, we’ve come to worship at the alter of the blues, to offer sacrifice (money) in return for salvation (tonight, a few pints of Guinness) and to bathe in the warming glow of a couple of the country’s finest blues acts.

First up, in his solo guise, Collard, Greens & Gravy front man, Ian Collard takes to the stage, cutting a solitary figure with just his guitar and harmonica for company, ethereal in the single spotlight, the maroon velvet curtain behind him and the quiet, assembled gathering in front of him giving this short support set an intimate vibe not much seen around these parts – certainly not you’re usual pub blues gig. Collard, who is obviously far more comfortable fronting his three-piece institution, pulls out all stops regardless and his guitar growls rambling grooves, hypnotic in their simplicity, while his harmonica wails over the top like a heartbroken freight train from the depths of hell. His voice is fantastic too, and mixing a few CG&G tracks over a few old classics, this set is smooth and scuffed and the correct way with which to begin proceedings indeed.

Next up, launching their fantastic second record, Dry Long So, are the Sydney based Blues Preachers, a duo who have begun to make waves on our little scene over the past year or so, and even ten seconds into their opening number, it’s easy to see why. ‘Songs from the great depression for the current depression’ is their watchword tonight, and how. The Preachers specialize in pre-war, rag time blues – Brother John spinning six string delights while Captain Bluetongue wails on the harp and they combine fine vocal harmonies to make something special indeed. These two could well have written the soundtrack to O’ Brother, Where Art Thou (and in fact, we get a couple from that soundtrack) such is their grasp of gospel tinged Appalachian blues tunes, and laying tracks like John The Revelator and Pay Day in there, well, this is a set to remember.

So it’s warm, sated, thirst quenched that we depart the Wesley Anne this chilly eve having seen and prayed and spoken in tongues at the alter of a music which is the base of so many others, and it’s thanks to Collard and the Preachers that the step is nimble and the heart light as I wander down High Street toward the Social Club and another gig, but it’s the blues, which remains in my heart.

The Blues Preachers were selected by Yoko Ono as RUNNER-UP in The John Lennon 70th Birthday Anniversary Song Contest for their song “Divine Justice Coming Down.”
http://www.jlsc.com/lennon_songs.php

The Blues Preachers song “Divine Justice Coming Down” was also one of 5 nominations in the sing out for social action category of the 2009 Independent Music Awards and a runner up in the folk and open sections of the 2009 Australian song writing Awards.

An Interview with The Blues Preachers is available on the Independent Music Awards website.
http://www.independentmusicawards.com/ima/artist/the-blues-preachers

The Blues Preachers song “Divine Justice Coming Down” was one of 5 nominations in the sing out for social action category of the 2009 Independent Music Awards.
It was a runner up in the folk and open sections of the 2009 Australian Songwriting Awards.
They have been nominated yet again in the acoustic category of the Independent Music Awards 2011 for “The Free Train Agreement”

I love this record. It’s a slice of 1929 for 2009. It’s also a record I’ve been awaiting with baited breath since chatting with the Sydney based Blues Preachers last year. Harmonica player, Captain Bluetongue sent me the rough mixes not long afterwards, and even in their rough state, these songs stood proud and defiant, much like the men in the soup lines you see on the cover of Dry Long So – broken men, but ramrod straight til the end, doing what they have to do to feed their families. That’s what this record is like.

Now then, in finished format, Dry Long So is even better in my humble opinion. The songs are, as I said, proud and defiant, but at the same time, as free as children – rag time tunes, country blues, foot tapping thinking mans blues right here from the Blues Preachers, who I think with this, their second record, have produced a winner, a record which will no doubt bring them the attention they so richly deserve. Now, Dry Long So is a record of covers, but don’t you dare hold that against this duo – firstly, because there’ll be an album or originals coming along some time this year, and secondly, because how the Preachers have arranged these tunes, and how they perform them on this record, well it’s just how they should, and would, have been performed on front porches, in cotton fields, on the sides of roads, in the deep south back in the great depression.

Tracks like opener, John Hurt’s Pay Day, are hauntingly real and authentic. Hurt features again with rag time tune, Beulah Land, a happy go lucky tune to be sure and there’s some Preacher-esque Robert Johnson as well in Red Hot, sung in hokum style, fantastic I say. Overall, I’m definitely looking forward to the Blues Preachers bringing us their own material, but in the meantime, it doesn’t get much better than this. Keep an eye out for these cats, you won’t be disappointed.

Headlining the night was the Blues Preachers from New South Wales, who captivated the crowd with a mixture of high-energy covers and originals. With Brother John and Captain Bluetongue dressed to match wearing suit pants and vests they seemed as if they were straight out of the Mississippi Delta.
After playing their version of John the Revelator – a traditional gospel song that has been recorded by Son House & Blind Willie Johnson and features on their newest album Dry So Long – they played through Mississippi John Hurt’s Lewis Collins.
In their respect for Mississippi John Hurt, the duo played a few more of his tunes. Brother John took the time to describe and explain the lyrical content of his song Pay Day and did the same for the following Prodigal Son. Some excellent harmonica playing from Captain Bluetongue was met with applause from the crowd.
The slow mournful Saint James Infirmary really moved the crowd and was their stand-alone song, followed by their final song Robert Johnson’s They’re Red Hot. 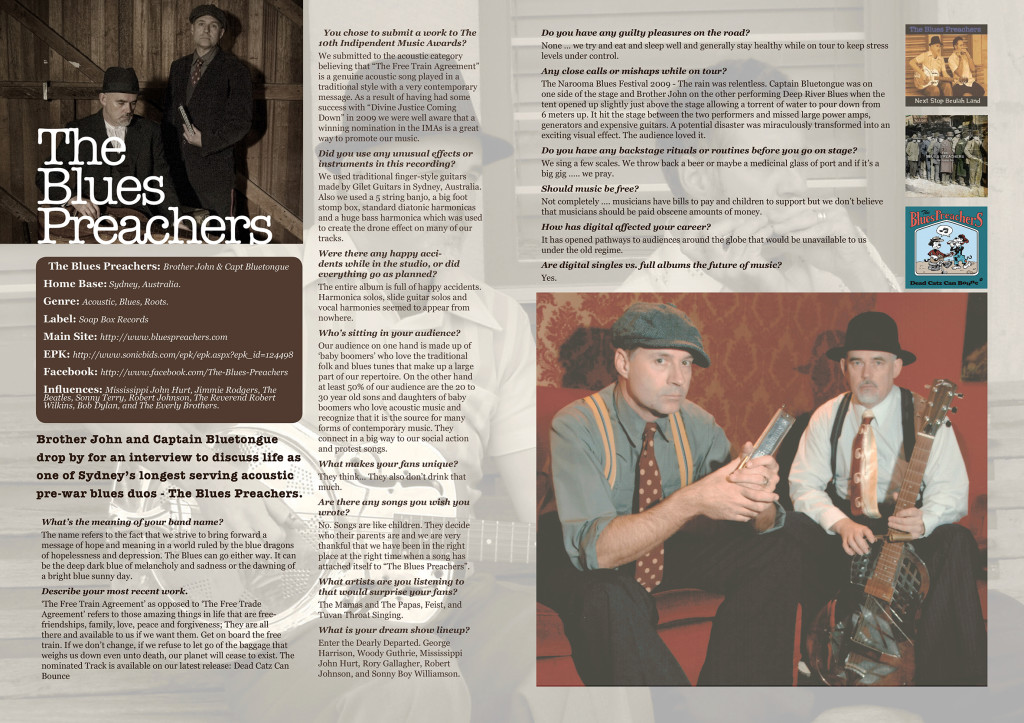